Naga Morich and the quest for the world's hottest pepper

By Julian Livsey
This is the story of what has become for many, an obsession. The story of the search for the world's hottest chili pepper. You may or may not agree with the information described below, the story is so subjective. We aren't claiming to know the whole story, but this is how we see it at present. If you agree or disagree, why not stop by our facebook page and tell us what you think.

For many years, due largely to its Guinness World Record status, the Red Savina, a Habanero type that had been subject to selective breeding by Frank Garcia, was held by most people as the hottest chili in the world. It had a Scoville heat rating of around half a million SHU, though more recent testing shows it to be closer to 300,000 SHU. There were other hot peppers of course, but a hot pepper was a hot pepper, nobody really cared too much whether one pepper was hotter than another. Then things started to change.

The first pepper to publicly challenge the Red Savina was the so called Dorset Naga. The people who introduced the pepper to the world, and took the newspaper headlines, were Joy and Michael Michaud, growers on the Dorset coast of England. They came across a pepper called the Naga Morich, already well known to England's Bangladeshi community. From the Naga Morich they repeatedly took the seeds from the best plants and pods and after a number of years were happy with the result, and named it the Dorset Naga. The full story of how the Dorest Naga was born is on their website, but as for the how hot the pepper was, Scoville heat testing in the USA revealed a range of heat levels, the highest at the time was 876,000, enough to make it significantly hotter than the Red Savina.

The Dorset Naga was not without controversy. While the Michaud's claimed their breeding was enough to make this a new pepper, some people suggested that without any crossing of varieties, the pepper was no different to the original Naga Morich. If you select seeds from the fattest fruit, or the bushiest plant, you are promoting certain genetic characteristics, but are you creating a new variety?

Next up were a couple of peppers called Bhut Jolokia and Bih Jolokia. The person who laid claim to the hotter of these two peppers, the Bhut, was Dr Paul Bosland of New Mexico State University's Chile Pepper Institute. The difference with Dr Bosland is that he did not claim to have created the pepper. He suggested that the Bhut Jolokia is a naturally occurring hybrid, from the Assam region of India. They collected samples and undertook field trials, and it was from these trials that the first pepper to officially challenge the Red Savina took the Guinness World Record with a heat rating of 1,001,304 SHU. At around the same time, an export company in India called Frontal Agritech measured what they were calling the Naga Jolokia at 1,041,427 SHU. The name they chose did nothing to quell the debate raging as to whether the Naga Morich and the Bhut Jolokia were different peppers. Their conclusions were that these two, and the many other similar names, all refer to the same pepper.

While the Naga Jolokia debate continued, and Dr Bosland was pictured with his official certificate from Guinness, a couple more peppers started to be talked about as possible contenders for the world's hottest chili pepper. The evil looking Trinidad Scorpion and the 7 Pod both had their roots in the Caribbean, and both started to be talked about at around the same time. Reports from people who were growing and eating them suggested that they were both as hot, if not hotter, than the Naga. Something that we certainly subscribed to when we first ate them a few years ago. As we write this, ‘official' tests of their heat are yet to materialize, though there is talk of some American growers about to launch the Trinidad Scorpion at the title.

Around 2008 and 2009, the pepper growing community saw the potential fame and fortune that a new discovery could bring, so it was hardly surprising that a new generation of hybrid varieties began to emerge. 7 Pot Jonah, Trindad Douglah, 7 Pod Primo, Scorpion Morouga, 7 Pot Barrackpore, Chocolate Devils Tongue. Did we miss any? Probably hundreds. We read about new names almost every week, but they are all variations on the peppers talked about above. ‘New' discoveries are few and far between. People no longer discover new varieties while trekking deep in the jungles of South America, these days all the new names seem to stem from the re-growing of existing peppers.

2010 saw the arrival of the Naga Viper, the latest variation of the Naga family and the latest chili pepper to claim the crown of the world's hottest. Measured by Warwick University at 1,359,000 SHU, this pepper is claimed to be a cross between a some of earlier peppers, Trinidad Scorpion, 7 Pod, Naga Morich and Bhut Jolokia, depending upon who you listen to. The grower, Gerald Fowler of Cumbria, England says that he spent more than two years developing the new pepper.

[Update!]
Allen Boatman has shared the story of this pepper, and it appears that this variety was around much earlier than we first thought. The Butch T Scorpion pepper seed was first multiplied and sent out by Mark M, of Hamilton, NJ. Mark received two Trinidad Scorpion pods from a seed trade in the summer of 2004 and was advised that they were pods grown from a plant acquired from Valley View Nurseries in Cockeysville, Maryland. The TS was as of then unknown on GardenWeb and by Coast 2 Coast Pepper Company discussion forum. Mark lost touch with the donor of the pods after the exchange. He did not taste them, but instead saved seeds, discarded the pods, and grew the seeds out in the summer of 2005.

Mark first tasted the Trinidad Scorpion in 2005. He knew from the start that the TS was a contender for one of the world's hottest peppers. He spread word on the original C2C site and, on 30th July 2005, sent seed to Butch Taylor (Crosby, MS), and other hobbyists in Cortland, NY, Stafford, TX, Bangor, ME, Sterling Heights, MI, Barstow, CA, and Brengues, France.

An Australian named the pepper in honor of Butch T, as Butch is who he acquired the seed from, and the name stuck.

Another year, another world's hottest pepper. 2012 had barely dawned when previous holder of the hottest pepper, Dr Bosland of the Chile Pepper Institute had the contents of his fields tested and low and behold, a new world's hottest. This time is the Trinidad Scorpion Morouga. With some impressive looking graphs and charts, the Morouga topped out at a shade over 2 million SHU, with an average rating of 1,207,764. They tested a few other peppers and put the new top five as: Morouga Scorpion, Chocolate 7 Pot, 7 Pot, Trinidad Scorpion and Bhut Jolokia.

Next up, in 2013, was the Carolina Reaper, originally code named HP22B, which took the official title of world's hottest pepper in late 2013, with a mouth numbing 2.2m SHU and an average of 1,569,300. Since late 2015, some have been questioning whether this variety/strain is any different to the 7 Pot Primo, a pepper which predates the Reaper.

Will it stop at the Carolina Reaper? Of course not. While there is money to be made from selling seeds and products made from peppers, there will always be claims and counter claims for the world's hottest chili pepper. The point being, are these really all different peppers or just different shaped pods? You can test the same variety of chili grown in two different climates and get very different SHU readings. You can test all the pods from a single plant and get another range of numbers, you can even test different parts of the same pod and get yet more heat levels, but what you cannot easily test is whether one pepper is really genetically different from another pepper. And that is what makes it such a game with no possible winner. Someone will always be willing to grow a hot pepper, give it a likely sounding provenance and a shiny new name and get a slightly higher Scoville rating.

thechileman and the world's hottest peppers

As exciting as all these reported new varieties of hot chili peppers are, thechileman hasn't got carried away yet, we haven't even added some of them to the database. But when the naga morich started to make a name for itself a few years ago, we couldn't resist cooking up a batch of naga based sauce. There weren't many naga sauce products on the market at that time so it would be fair to say we had a few requests for bottles(!) The Original Recipe was soon followed by a version called Private Reserve which had even more naga morich pepper than the original, but the hard core chilli heads among you said the sauce was very hot, but not hot enough. At first Mark thought you were joking and that you couldn't possible want more heat than the Private Reserve - each bottle stuffed with ten whole fresh naga morich pods. Rising to the challenge, Mark locked himself away in thechileman laboratory and brought you the third version of our sauce - Pure Venom.

"The flavor of Naga Private Reserve is fantastic for those that love pure pepper flavored sauce."
Read the full review at hotsauceblog

"The heat just kept pounding me and pounding me and by the time I was finished tears were streaming down my now red face". Taste: 9, Heat: 9.978
Read the full review at the hotzoneonline

Naga Snake Bite has now been featured in the Daily Star, Northern Echo, London Metro, Tyne Tees Television and HDTV in the USA

A reporter at the Northern Echo took a spoonful during an interview and describes the heat of Naga Snake Bite Sauce.
read here


About the Naga Morich pepper 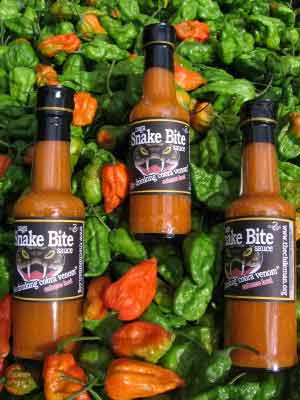 The Naga Morich 'snake or serpent chilli' is one of the world's most sought after and fearsome chilli peppers. A recent sample of this rare Bangladeshi chilli was tested* using High-performance liquid chromatography and registered a mind blowing 1,598,227 Scoville Heat Units (SHU), that's 3 times hotter than the Red Savina Habanero or 300 times hotter than a Jalapeno pepper!

In its native Bangladesh, it is used sparingly (and with great care) to add a searing level of heat to dishes by simply rubbing green unripe pods on ingredients. Even the fiery food loving Bangladeshi's are not stupid enough to eat a whole Naga pod.

One of the questions we hear most often is, which is the hottest pepper? There are more than a few possible contenders. Read the evolving history of the hunt for the world's hottest pepper.
read more